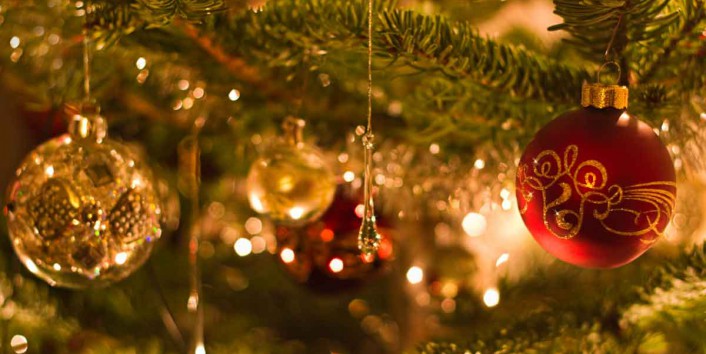 I sat at my desk in Africa and quietly reflected on how drastically different Christmas was this year.

For the first time, there was no tree with a myriad of sparkling lights. No favorite angel stockings were hung on a fireplace. Our walls were not festively decorated with a blaze of shiny red bows. All of this wasn’t happening because we were in Africa in December of 2003 and everything I just described was snugly packed away in our home in America.

Yet all month long, our Ugandan family had filled every nook and cranny of our home and our hearts with demonstrations of love that red bows, stockings with angels embroidered on them and strings of colorful lights could never begin to do. Presents that all the money in the world could not buy were daily showered on us. They were priceless gifts of hearty laughter, tears of appreciation for our love for them and grateful hugs that we were with them this Christmas, rather than with our loved ones in the United States.

Then came the week before Christmas.

It was a stark reminder that there is a cost to serving the Lord. We were out of funds and food. I began to wake up hungry in the middle of the night and feel increasingly weaker. A severe infection erupted. Due to my physical weakness, it was able to overtake me.

Later an American doctor told us that this illness should have killed me.

As I feverishly lay in the darkened room of our compound, I was overwhelmingly grateful that long before we had embraced our call to Africa, we had resolutely decided that to see God change the lives of people wherever He sent us was worth whatever price we encountered.

We also were convinced even during these days of intense hardship in Africa that it was a priceless gift to be called to leave the comforts of America so that we could bring the hope of Jesus and the comfort of His miraculous presence to such a desperately dark place.

But despite our peace, I grew more seriously ill. The pain of intense concern on Barry’s face whenever he came to be with me hurt my heart. It was so hard on him to watch what was happening to me. Yet we knew we couldn’t do anything except trust the Father with all our hearts to somehow help us.

The day before Christmas our miracle came.

A phone call awakened us at 2:00 in the morning and a man from America who wasn’t even a Christian told Barry, “I just wired funds to you at Western Union.” We made plans to give a generous amount of this blessing to a pastor who had no food for his wife and children. Then as soon as it was possible, Barry left to buy my medicine and just enough food to last us two more days.

Shortly after he returned from what became a dangerous trip to Kampala, our beloved African family began to come to our home to greet us for Christmas. One of our visitors was a young man on our Ministry Team.

His words pierced our hearts:

“My people are saying all of the time: ‘Who are these white people who are willing to live among us and be just like us? Surely the only difference between us and them is the color of our skin.’ Mama Ruth and Papa Barry, it’s unheard of for my people to feel this way about ‘musungus.’ But never have we known such love. Because you have shown us so much kindness, this is affecting my people. They are now loving one another and this is very different for them to do this. But I see it happening. I see people changing because of the love you have shown us.”

Our last guest was Eugene, a former influential businessman in Rwanda. He had escaped with his family from the genocide that slaughtered his tribe. Although this distinguished looking man used to be a person of great stature and wealth, now he was destitute. He had suffered from tragic violence in Rwanda and then in horrible conditions of a refugee camp. His own wife was savagely mutilated and brutally beaten. She died shortly after escaping with Eugene to Uganda.

But still he had a tender, forgiving heart.

As we visited with this special man, our home grew dark and we lit many candles that were clustered together on a village table where we all sat. Then as I began to play the harp, the candlelight glowed on our faces.

Eugene wept as our voices rose in tender worship.
The Prince of Peace descended.
A hushed silence fell upon us.

The days of illness and hunger disappeared from our thoughts as Barry and I gratefully basked in God’s presence that now enveloped us.

The following morning at church, Eugene’s family led the congregation in songs and dances of rejoicing.

And when people have been set free from such horrors, their contagious joy that radiates from their countenances is gripping and unforgettable.

We later shared a special meal with our son Paul who was once the witchdoctor of Seguku. Then we traveled to a nearby village to visit Pastor Jimmy’s unsaved sister who was close to death from the ravages of AIDS. The family warmly greeted us as we entered their mud walled hut that was dimly lit by a cracked lantern.

The young girl was waiting to die as she lay on the floor next to where I sat. She grimaced with excruciating pain and feebly lifted her frail hand to touch me. There was a haunting fear in her terrified, sunken eyes that was heartrending. She was so scared to die this young and in such a tormenting way.

I knelt down on the dirt floor to be near her. While I held her hands that were burning up with fever and gently stroked her emaciated face, I whispered these words to try to comfort her:

Soon the sounds of heaven from the harp filled the hut. Unsaved villagers immediately gathered at the window and filled the doorway. Their faces were filled with awe, especially the moment we sang, “O Come Let Us Adore Him.” It seemed like we could hear the angels worshipping with us.

Suddenly, Jimmy’s sister sat up. With shocking strength she lifted her arms and began to sing with us. Right before our eyes we witnessed a supernatural peace transform her. She no longer looked like the horrifically troubled person we had met just moments ago. Her pain-wracked body was now relaxed. Soon she was able to lie down with a childlike smile on her young face.

Barry and I were deeply affected by being with these simple, humble people that Christmas night. They had absolutely nothing. Yet their eyes glistened with an indescribable joy. What a fitting place for a visitation of the presence of God on the night we were celebrating the birth of Jesus, ages and ages ago. I marveled as I reflected on how He also came to a humble place with only a dirt floor and the smell of animals.

When we traveled back to our village, Barry told me:

“There were several large rats around your feet the whole time you were playing the harp and they didn’t go anywhere else in the room. I sensed they wanted to stay close to you because they were drawn to the presence of God and the sounds of heaven from the harp. It was amazing to watch this happening. They didn’t want to hurt you. They just wanted to be near the harp.” 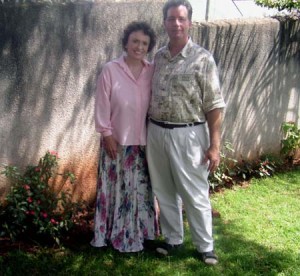 Yet, gratefully I had been oblivious to the rats. God often did this for me during our years in Africa. He protected me from what would have been too terrible for me to see.

Then one day there was a knock at our large gate and Pastor Jimmy entered the compound to tearfully tell us:

“After you left, my sister became born again.

All the family was with her as
she peacefully went home to Jesus.”

We knew that for the rest of our lives we would remember the most incredible December we had ever experienced and that these Christmas memories from Africa would live on in our hearts forever. 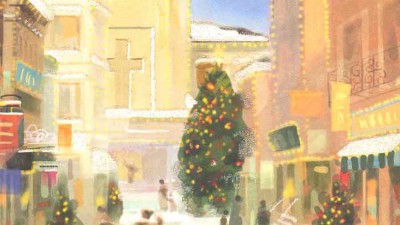 Prophetic
The Story of December 26